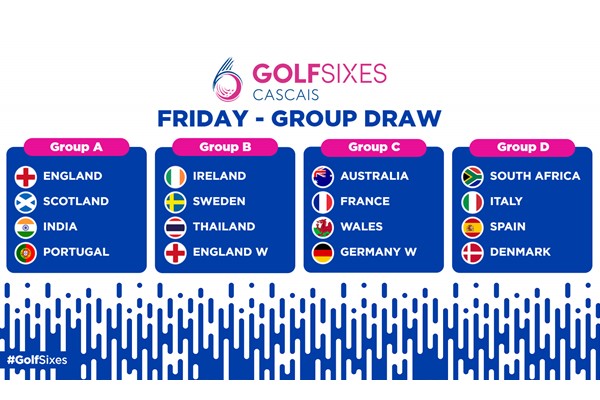 Four Ladies European Tour members will represent their respective nations when they participate in the innovative GolfSixes event at Oitavos Dunes, from June 7-8.

An England Women’s team comprising Meghan MacLaren and Florentyna Parker, who have five Ladies European Tour titles between them, will face the 2018 champions Team Ireland – Paul Dunne and Gavin Moynihan – in their opening match in Group B, which also includes Sweden’s Alexander Björk and Joakim Lagergren and Thailand’s Thongchai Jaidee and Pachara Khongwatmai.

A Germany Women’s team consisting of 20 year old Esther Henseleit, who enjoyed a strong start to the U.S. Women’s Open and another young rising star Laura Fuenfstueck will compete against France’s Mattheiu Pavon and Romain Wattel in their opening match. Group C also includes an

In Group A, the opening tie of the 2019 edition will feature Portugal’s wildcard team – childhood friends Pedro Figueiredo and Ricardo Gouveia – taking on England’s Tom Lewis, the reigning Portugal Masters champion, and Paul Waring. Joining those two teams will be Scotland – with 2014 Ryder Cup winner Stephen Gallacher joined by his fellow winner on the 2019 Race to Dubai David Law – and they will face an India team featuring S S P Chawrasia and Gaganjeet Bhullar in their opening tussle.

Team Italy will be led by 2010 Ryder Cup star Edoardo Molinari, who will be joined by exciting young prospect Renato Paratore as they take on Team Denmark – comprising 2018 European Challenge Tour Number One Joachim B Hansen and Jeff Winther – in the final match of the opening session.

Two more sessions will make up Friday’s action and the top two teams in each group will progress to Saturday’s quarter-finals, when the knockout drama gets underway. After the semi-finals and a third and fourth place play-off, the winner will be decided on Saturday afternoon in the grand finale.

The exciting two-day tournament is being played over a Friday and Saturday for the first time. With the UEFA Nations League Final and Third-place play-off taking place in Portugal on Sunday June 9, an exciting weekend is in store for Portuguese sports fans and tourists alike.

The GolfSixes format has not only proven a huge success on the European Tour – with The 2018 Ryder Cup also featuring the concept as part of its build-up at Le Golf National – but it has also been adopted across the grassroots of golf.

The Golf Foundation, a registered charity with the aim of bringing golf to young people, has – in association with the European Tour, the R&A, England Golf, Wales Golf and Scottish Golf – launched a GolfSixes League throughout Britain for juniors.

Since May, 24 leagues have been staged across 22 UK regions, involving 112 golf clubs and nearly 1,500 junior golfers. Early results showed that nearly 30% of participants have been girls. The GolfSixes concept has also been rolled out in England, Belgium, Denmark, France and the Netherlands and qualification events have taken place in those countries, with the winners earning a spot in the GolfSixes Cascais Pro-Am.

Oitavos Dunes is currently ranked 55th in Golf Magazine’s Top 100 Golf Courses in the World and is listed as Portugal’s Number One golf course.

It has hosted the Open de Portugal on four occasions, first in 2005 when Paul Broadhurst emerged victorious, and then in three years in succession in 2007, 2008 and 2009, won by Pablo Martin Benavides, Grégory Bourdy and Michael Hoey respectively.

Find out more about the tournament at the European Tour website.