Narrow Lead for Europe After Day One 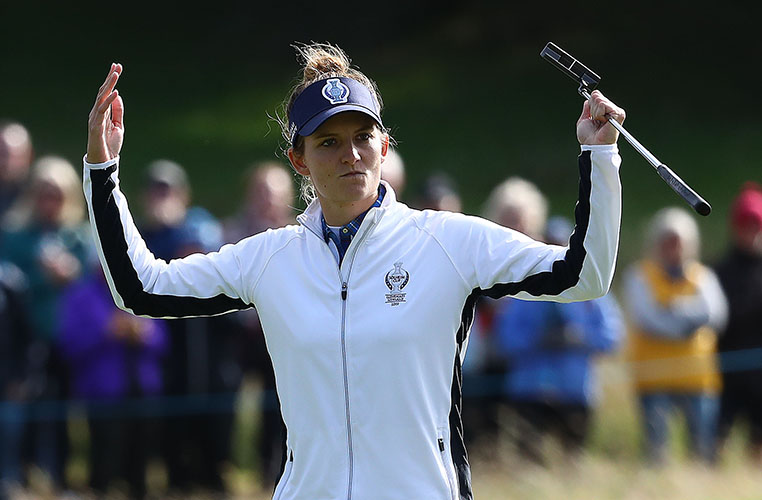 Europe will take a narrow one point lead into the second day of the 16th Solheim Cup at the PGA Centenary course at Gleneagles.

The home team are 4 ½ – 3 ½ in front heading into the second series of foursomes and fourballs but it is the American team who have momentum on their side after a dramatic finish to the day in which they came from behind to salvage halves in both of the last two fourball matches.

The home side took a slender 2 ½ – 1 ½ lead into the fourballs but it disappeared when in the second match on the course Ally McDonald and Angel Yin, both left out of the morning foursomes, took just 13 holes to beat Swedish duo Anna Nordqvist and Caroline Hedwall 7 & 5. 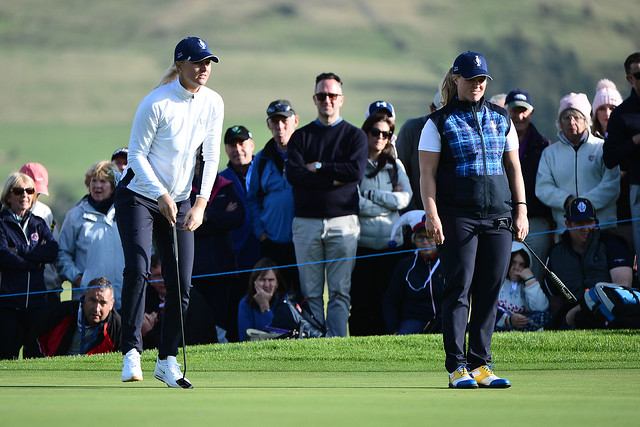 The Americans good off to a fast start with birdies at the first three holes and they also birdied the fifth, ninth, tenth and 11th to increase that advantage to seven. Nordqvist did get one hole back with a birdie at the 12th before McDonald, a late replacement for the injured Stacy Lewis, closed out the match with a par on the next.

The 7 & 5 score tied the record for the biggest margin of victory in a Solheim Cup fourball, set by one of this year’s US Vice-Captains, Pat Hurst, and her partner Rosie Jones in their match against Lisa Hall and Sophie Gustafson at Muirfield Village in 1998.

“That was the year I was born,” laughed a delighted Yin.

“I would say we’re ham and eggs. We’ve always got each other’s back, no matter what, and we work together as a team, communicate well. We’re just such a good pairing.”

Her partner McDonald added: “When Juli called me in to replace Stacy, I knew it could go either way, so to be able to go into my first match and get a point for the US means a lot.” 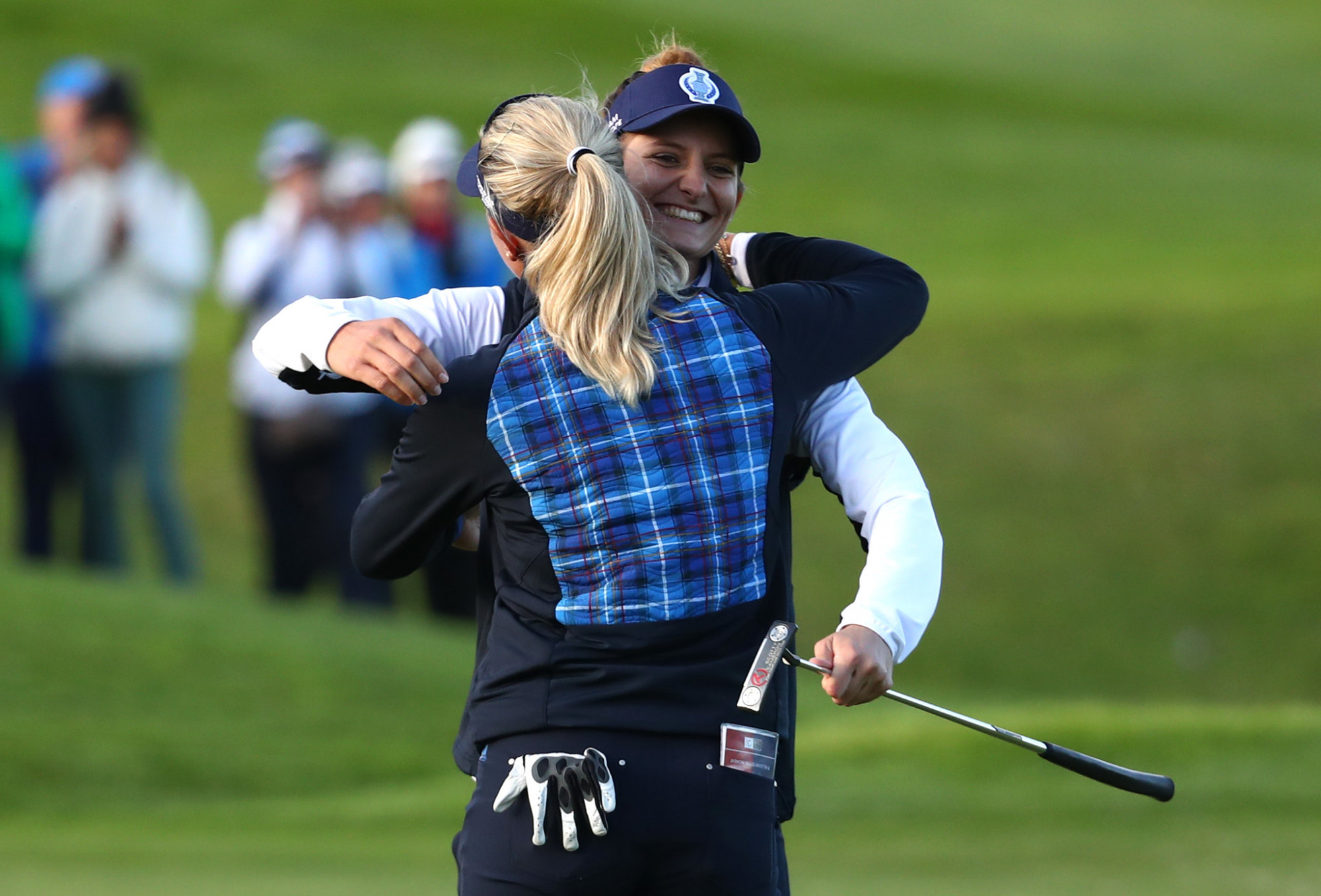 The USA won the first fourball series 4-0 two years ago in Iowa but any hopes they had of replicating that feat disappeared when the veteran Swede, Suzann Pettersen, and the rookie Dutchwoman, Anne Van Dam, beat Danielle Kang and Lizette Salas 4 & 2. It was a significant win for Pettersen because it was her ninth Solheim Cup fourball victory, tying the European record, held by Laura Davies.

“I just want to say I had the best partner in the world today,” said the Norwegian. “I told you we don’t have any rookie on the team. I mean, this girl, I think she’s the best golfer I’ve ever seen on the women’s side. Today, she was an absolute rock star.”

Van Dam added: “Walking through that tunnel, especially to play with Suzann who has been my idol growing up, for her to say, ‘Let’s enjoy this,’ that is what I was going to do. I was just hitting it solid from the beginning. It is not an easy golf course. Even from the tee you have to hit it in the fairway. If I hit it in the rough I lose my advantage a little bit from the tee, but it was great. I’m happy I played well and I was happy and comfortable around Suzann today.”

At that stage, the Europeans were one point clear of the Americans and that is how it remained when Lexi Thompson holed a curling 25-foot birdie putt across the last green to secure a halve for her and partner Jessica Korda against Bronte Law and Carlota Ciganda. 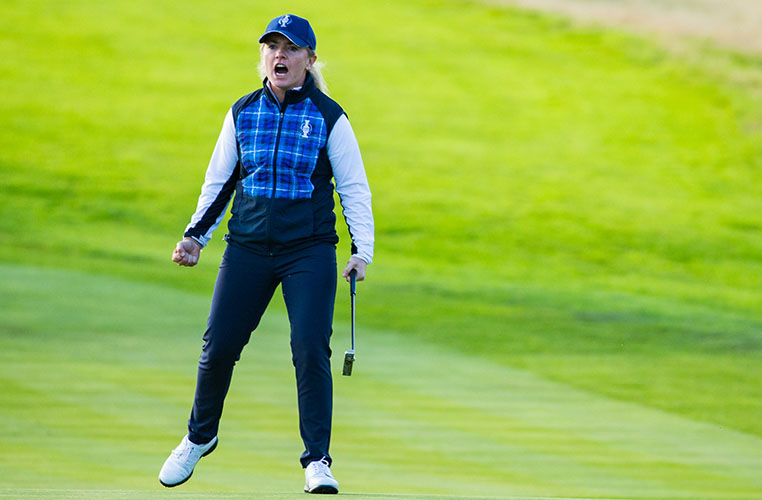 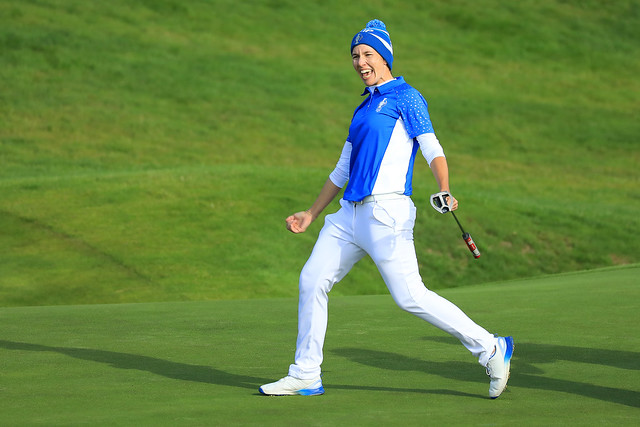 Then, in the final match, and with the sun starting to set at the end of a long but riveting day, the Europeans, Charley Hull and Azahara Munoz, also lost the last to a birdie to tie their match with Nelly Korda and Brittany Altomare, having been four up with five to play. This time it was rookie Altomare who did the damage, also holing out from long range to keep her side within one point of their rivals. 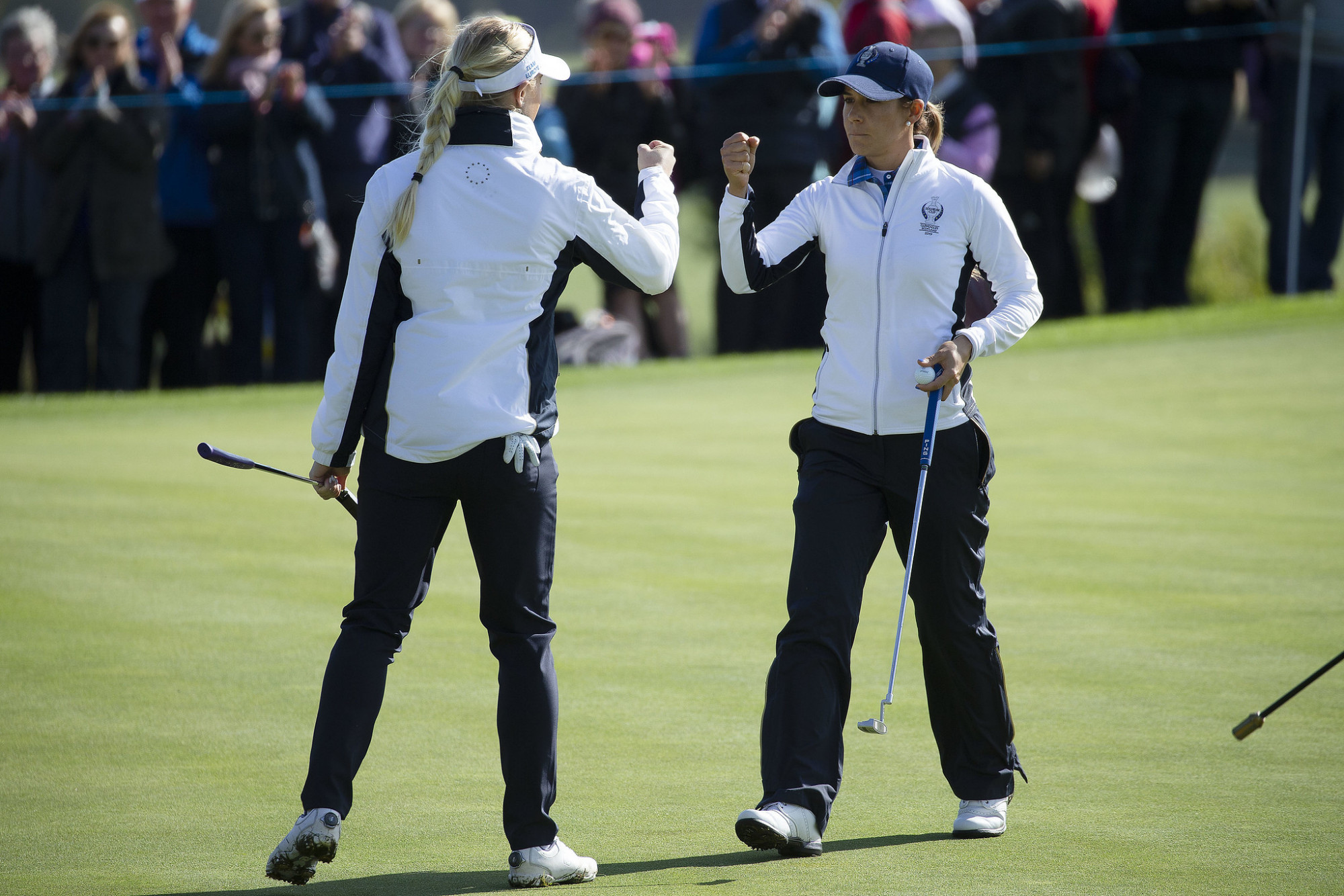 “Those two half points at the end of the day were huge,” said US captain, Juli Inkster. “For two rookies (Nelly Korda and Altomare) to be four down with five holes left and come back and tie, you can’t teach that. It’s just in your belly. I’m just so impressed with them. It was a great end to the day.” 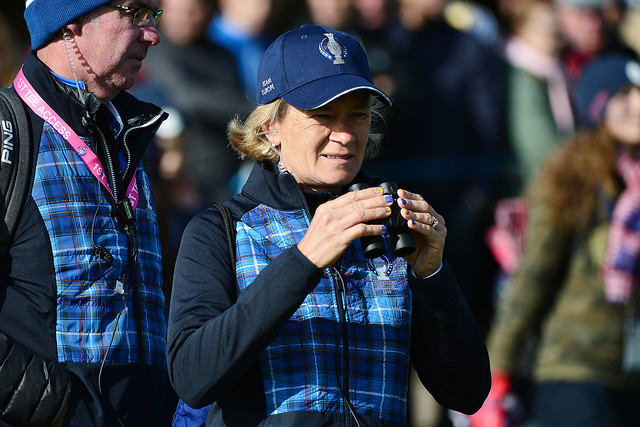 European captain, Catriona Matthew, said: “Obviously, we got off to a great start in the foursomes. Our objective was to win every session.

“The finish wasn’t what we were looking for, everyone’s a little disappointed with that, but I think you have to take the positives. We’re leading. We’re a point up. If we’re leading at the end of each day, that would be great.”

The Scot brings back Georgia Hall and Celine Boutier and Charlie Hull and Azahara Munoz after both pairs won on the first morning. Carlota Ciganda and Bronte Law also return after halving their first foursomes match. The newcomers are Anna Nordqvist and Anne Van Dam.

The American captain Juli Inkster has rung the changes in an effort to make up the 4 ½ – 3 ½ overnight deficit. She has given a second foursomes start to Jessica and Nelly Korda who won on the first morning and also Morgan Pressel and Marina Alex who supplied a half point against Ciganda and Law. The new American pairings are Lizette Salas and Ally McDonald and Danielle Kang and Megan Khang.

The first match on the course at 8.10 will feature Nordqvist and Van Dam against Pressel and Alex. They are followed by Hall and Boutier against Salas and McDonald at 8.22, Hull and Munoz against Kang and Khang at 8.34 and Ciganda and Law against the Korda sisters at 8.46. 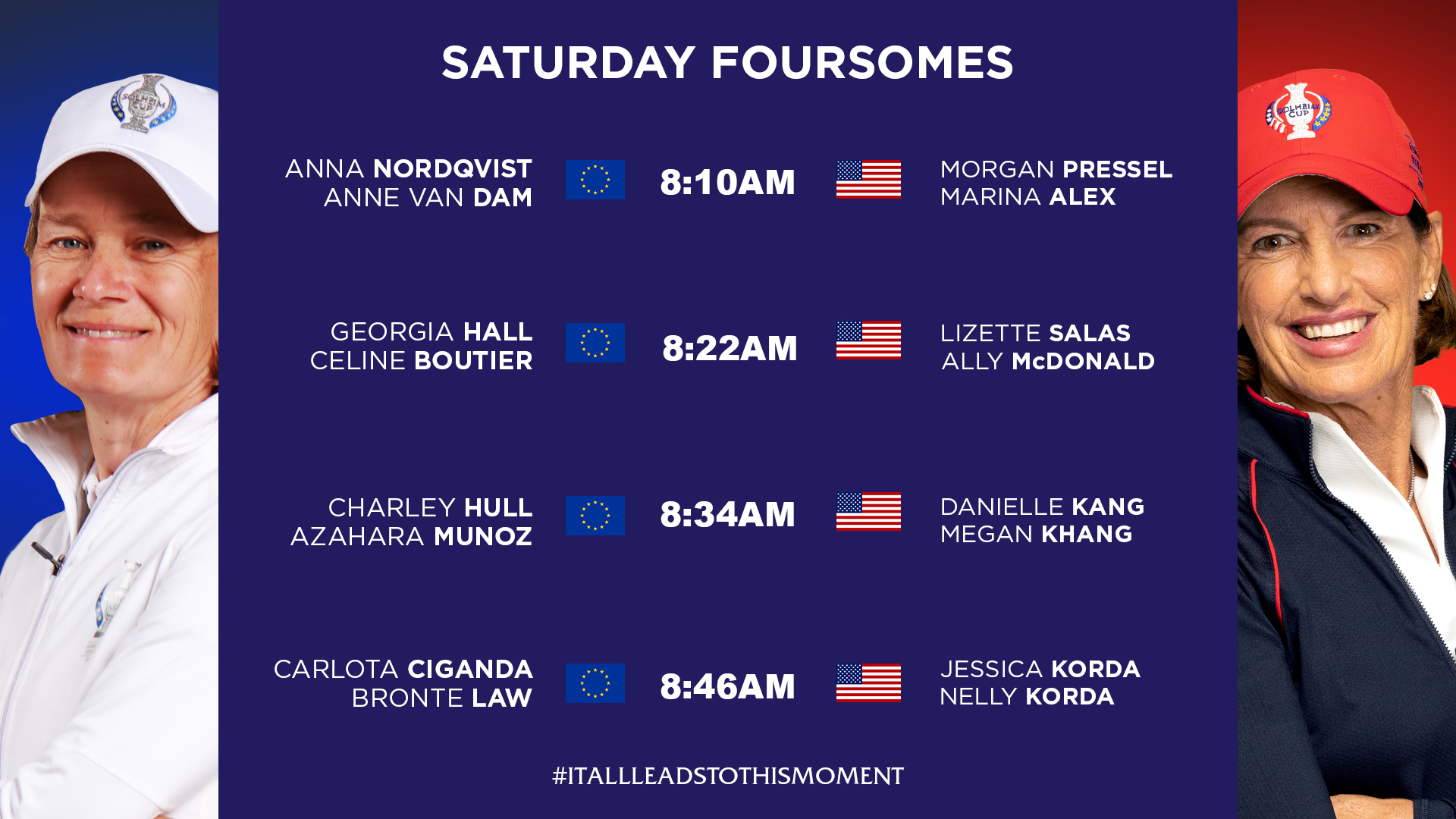