Par for the Force 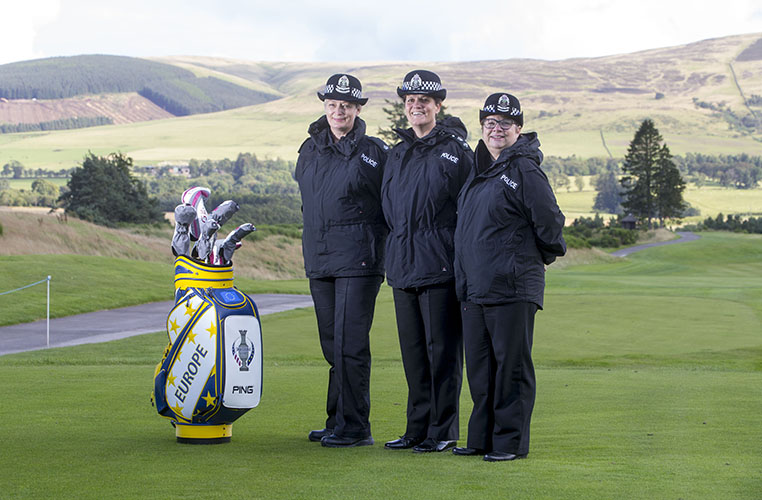 The 2019 Solheim Cup will become the first ever major event in Scotland to feature an all-female police command structure.

Chief Superintendents Sharon Milton and Suzie Mertes, and Superintendent Maggie Pettigrew, will take control of safety proceedings when the biggest competition in women’s golf gets under way next month.

Police Scotland provides policing support to major events and the role of the command team is to oversee the policing response, ultimately to ensure public safety.

All three officers are vastly experienced in commander roles at major events in Scotland.

In 2005, Chief Superintendent Milton policed the G8 Summit at Gleneagles while more recently, she was Gold Commander at the Women’s Tour of Scotland cycling event.

The Solheim Cup is the biggest single sporting event in Scotland in 2019 and is expected to draw in the region of 100,000 fans to the world-renowned PGA Centenary Course at Gleneagles between 9-15 September.

The event, which is fully funded by the Scottish Government, will see the top female golfers from Europe and the USA competing for the iconic Solheim Cup.

Chief Superintendent Sharon Milton said: “We are delighted to be supporting the Solheim Cup at Gleneagles this year and it is fantastic to have a strong team, including for the first time we believe a command team made up of female officers, on hand to provide policing support to this major event.

“This is a great event for the area and we have been working closely with the event organisers and our partners to ensure golf lovers, their friends, and families have a wonderful experience at the Championship.”

Paul Bush, Director of Events at Visit Scotland, said: “We’re looking forward to welcoming three highly-respected officers to Gleneagles as the command team for the Solheim Cup, and it is hugely positive that the command is entirely female.

“We are confident the command team will help us deliver a safe and memorable tournament for everyone who attends the event next month, and together we’ll further showcase Scotland’s credentials as the perfect stage for major events.”

Being delivered by VisitScotland on behalf of The Scottish Government, the 2019 Solheim Cup aims to help promote Scotland as an open and inclusive golf tourism and events destination, whilst also contributing to the drive for equality across sport and wider society domestically.

The Scottish Government hopes for the 2019 Solheim Cup to be the biggest-ever European edition of the event, and the most family-focused golf event in history with around 100,000 spectators expected at Gleneagles and a host of activities for families and young people on site.

Adult tickets are available from just £25 with children under 16 able to attend for free when accompanied by an adult. For more information visit www.solheimcup2019.com