Pettersen on motherhood and her return 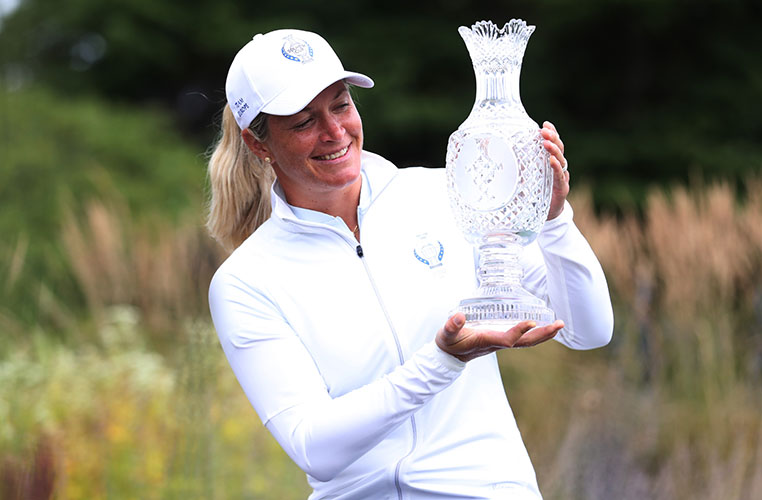 Suzann Pettersen on her return to golf and The Solheim Cup (courtesy of LPGA.com)

I have to be honest: there was a point when I wasn’t sure if I was ever coming back to the LPGA Tour. Not because I didn’t think my game was good enough or because I had lost my love for the game. But competitive golf requires a commitment and a focus that most people don’t understand. I wasn’t sure that my heart was completely in it.

People always say that becoming a parent is the best thing that ever happens to you. But you don’t really know what that means until you experience it for yourself. The year I spent at home with our son Herman was the greatest gift ever. Not only did I experience all the joys of being a mother, I realized how much I love being home and taking care of Herman, my husband, Christian, and my family in general.

I thought it was funny when some people said I’d become a recluse. Nothing could be further from the truth. I was just as social as ever. I was just out of the spotlight.

Being away from golf has been tough at times. I feel like I have a lot of game left. By the same token it was really hard to leave Herman and Christian to come to Canada for the CP Women’s Open. It’s the first time we’ve been away from each other for more than a few miles and a few hours. Now I’m away for two weeks without him. It’s the first time that I’ve crossed my fingers and hoped that all the notes and routines that I’ve left will be read and followed.

I don’t know how it works in other households but I’m the one who makes sure everything runs smoothly at home. Christian is great – a fantastic dad – but guys are guys. They forget stuff. I’m the planner. So, naturally I worry a little.

I catch myself thinking, ‘Is this really worth it?’ But I also realize that in the grand scheme of things, it’s such a short time. I know he’s being well cared for. It brings a different perspective, though.

From this point forward, I know that I can’t copy and paste what I used to do. My time is not the same. My energy is not the same. When I have time to practice, I practice. And I probably practice better than I ever have. The quality is right there. Nothing’s wasted. I’m a lot more efficient. It’s funny because I now think about all the time I used to have and I wonder what in the world I was doing with it.

Coming back was a little different. I was actually nervous at the Dow Great Lakes Bay Invitational when I was introduced in the pro-am that I played with Commissioner Mike Whan. That’s when I thought, ‘Wow, you’ve been away too long if you’re nervous in a pro-am.’ Even so, it’s nice to know that your heart is still in it; that you still care about your game. That’s never a given.

I still have a lot of passion for this game. I still feel like I have a lot in the bank. (Europe Solheim Cup captain) Catriona (Matthew), my team partner in Michigan, must have seen that because it wasn’t long before she was throwing my name around with the other vice captains as a possible captain’s pick for the Solheim Cup.

When the idea first came up, I said, “Are you guys out of your minds?” I felt as though I was prepared for Dow, prepared to get back out onto the LPGA, but not in my wildest dreams did I think I would be picked to play at Gleneagles.

Obviously Catriona saw something. It’s the first time I’ve ever been a captain’s pick. I take it as a huge compliment and an honor. There’s a lot of pressure, too. As a competitor I want to be prepared and do everything I can to be ready. Playing in Canada and Portland gets me two weeks on the road. Then I have a few days at home before getting to Scotland early.

I really appreciate everyone coming up and congratulating me for being on the team. It was not a gimme this time. I was definitely the underdog. It means a lot that the other players appreciate the fire and the passion that I bring to the team.

I’ve been thinking a lot about 2017 and how I wasn’t able to play because of injury. There comes a time in everyone’s career where you see a lot more road behind you than there is ahead. I’m not sure how many more Solheim Cups I’m going to get to play. It would have been sad if 2017 was my last opportunity. To be able to get at least one more shot at it means a lot to me.

I just can’t wait to get out with these young, great players and be a part of it.

So, yes, my life is very different now. When I’m at home, I’m a wife and a mother; when I’m on the course, I’m a golfer. Hopefully, in the Solheim Cup, I can be as good a teammate as I hope I am as a mom.