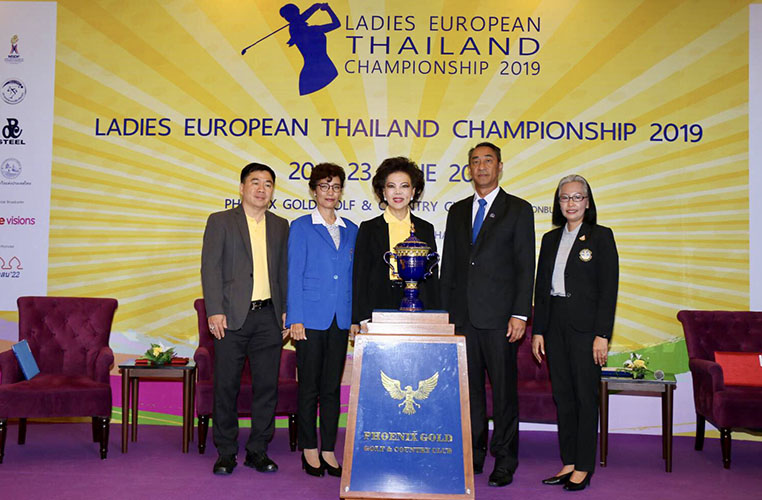 Officials gathered for a press conference at Phoenix Gold Golf and Country Club in Pattaya, Chonburi, on Tuesday ahead of the Ladies European Thailand Championship, which returns to the venue for the third successive year from 20-23 June 2019.

Phoenix Gold Golf & Country Club President, Khun Chanya Swangchitr, said: “It’s a great honour that Phoenix Gold Golf and Country Club will host this important women’s golf tournament for the third consecutive year. In the past two editions, history has been made in this tournament, which brings a great deal of good memories. Once again, we are glad to welcome the leading golfers from Thailand and around the world to compete in the tournament which puts Phoenix Gold Golf and Country Club on the world map. Furthermore, the Ladies European Thailand Championship helps not only to promote Thailand to the global arena but also to boost the economy and the tourism industry both in Pattaya and nationwide. We look forward to welcoming the players to our golf course which is in perfect condition and full of challenge.”

In the inaugural Ladies European Thailand Championship, history was made when Thai amateur Atthaya Thitikul lifted the trophy and became the youngest winner of a professional tournament at the age of 14 years, 4 months and 19 days. She also gained rapid worldwide recognition as the youngest ever winner on the LET, surpassing the previous record held by former world number one Lydia Ko.

In the following year, Kanyalak Preedasuttijit succeeded Atthaya by keeping the trophy on home soil after she claimed a one-stroke victory over South Korean amateur Selin Hyun.

As the host, Phoenix Gold Golf and Country Club has played a significant role in hosting two successful editions of the LET Thailand Championship.

Ampai Sakdanuguljit Sliwinski, Assistant Director of Chonburi Provincial Office of Tourism and Sports as the host province of the event, said: “Chonburi is the perfect choice in organising sport tournaments both at the local and international level. This will show that Chonburi holds the full potential to support such events with a high standards of accommodation, attractions and food for visitors. This tournament will be another showcase to prove its potential.”

Along with the LET, as the main sanctioning tour, the Thai LPGA was represented by Mrs. Varassuda Pisutsin, who said: “The Thai LPGA is honoured to join hands with the Ladies European Tour, which is one of the world’s leading women’s golf tours and sanctioning the Ladies European Thailand Championship for the third consecutive season. The tournament serves up an opportunity for Thai LPGA players to compete and exchange experience with international competitors and at the same time to develop their skills. This is a great opportunity for Thais to prepare themselves for the upper levels of competition in the future, just like the 2017 and 2018 champions already achieved.” 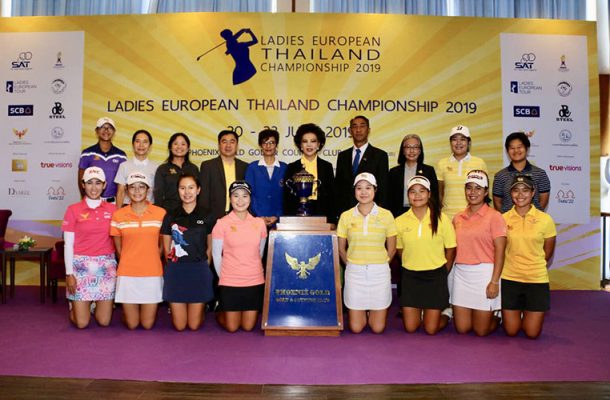 Somsak Udompornsin, Marketing Director of the event promoter, Wangson Image, said: “As the organiser of the tournament, we are glad to stage this world class women’s golf tournament for the second year. We are also honoured to play a part in supporting local women’s golf. Furthermore, this tournament can not only boost local tourism in Pattaya and Chonburi, but can also help promote Thailand to golf fans around the world through live broadcasting, including to over 20 million households in Thailand on TrueSport HD 3.”

Ladies European Tour CEO Mark Lichtenhein commented: “We cannot wait to come back to Pattaya, the host town of this fantastic event for the last two years. I really hope that this event is helping the growth of golf in Thailand. Obviously we had two Thai winners in a row and maybe this year there will be another one. It’s great to see the event growing year by year. We want to do everything we can to help Thailand grow its natural talents. I invite everybody to come along this year to see the third edition of the Ladies European Thailand Championship.”

Live Broadcasting of the Ladies European Thailand Championship can be followed on TrueSport HD3 on Saturday, 22 June and Sunday, 23 June between 13.00-16.00hrs and through the LET’s international broadcasting platform. Tickets, Bt100 per day per person, are available at the public entrance to the course.