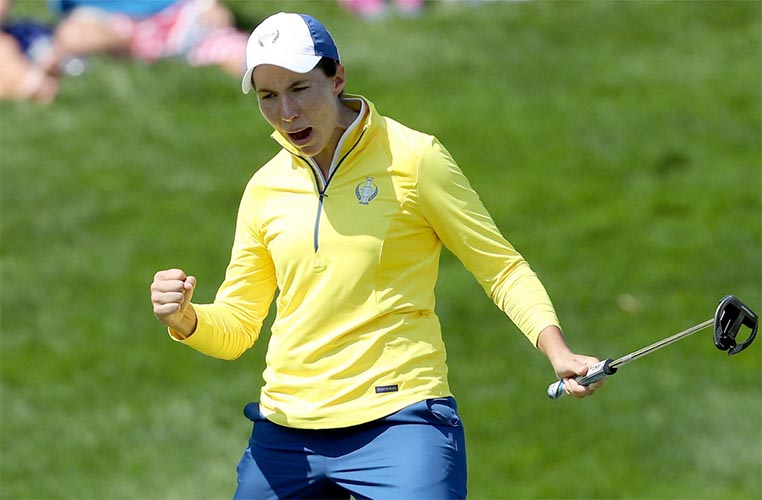 One of the hottest players in world this year, there was never any doubt Carlota Ciganda was going to be front and centre in the European team for The 2019 Solheim Cup at Gleneagles.

It will be the Spaniard’s fourth appearance at the event after finishing top of the points list to qualify automatically, with 12 top-20 finishes demonstrating her incredible consistency.

There are also few players who embody the spirit of The Solheim Cup quite like Ciganda, who was a rookie in 2013 when Europe completed an historic first win on American soil.

She has since been an ever-present member of the European squad, playing a leading role in the 2015 and 2017 editions, improving her overall record to six points from 11 matches.

But it’s not just her ability to rack up the points that has seen her become a Solheim Cup favourite; Ciganda is known for wearing her heart on her sleeve and her passionate celebrations.

Ciganda was one of six Team Europe rookies when she made her debut in 2013 under Captain Liselotte Neumann after earning her place on the plane to Colorado outright.

While she sat out the opening foursomes, Ciganda made an instant impact in her first taste of The Solheim Cup by winning her afternoon fourballs contest alongside Suzann Pettersen.

Another victory followed in Saturday afternoon’s fourballs alongside her compatriot Azahara Muñoz, before Ciganda finished off a perfect weekend with a 4&2 win over Morgan Pressel in the singles.

Her 3-0-0 record across the three days ultimately played a key part in Europe retaining The Solheim Cup for the first time and by the largest margin of victory for either team.

Having taken to the biennial matchplay contest like a duck to water, Ciganda secured her immediate return to the European team for their defence of the title at the 2015 edition.

Paired with Mel Reid in the Friday afternoon fourballs, Ciganda halved her first match in Germany before the duo took the full point in their Saturday morning foursomes clash.

Her first Solheim Cup defeat eventually arrived in the afternoon fourballs, before earning a hard-fought half point against Lexi Thompson as Europe narrowly lost out to the USA overall.

Ciganda will head to Gleneagles with a point to prove in the Solheim Cup after losing three of her four matches in 2017, only beating Brittany Lincicome in Sunday’s singles.