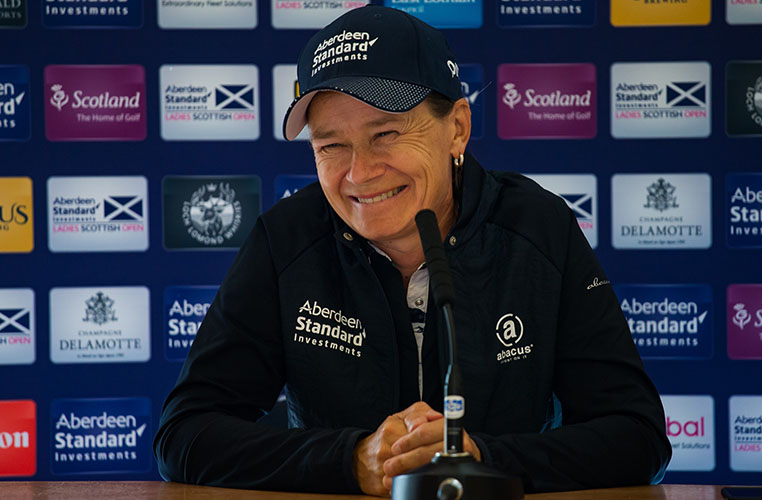 It’s not often a professional golfer has a commute of less than five miles. However, that is exactly the case for North Berwick-resident Catriona Matthew this week. The major champion took home the 2013 and 2011 Ladies Scottish Open titles, and returns this week to The Renaissance Club just five miles down the road from her house.

“It’s great fun playing at home,” Matthew said on Tuesday. “Obviously there’s more pressure I think. It’s always tougher, especially when you do it so infrequently, I think, playing in your home country. For me, this really is at home. I live just down the road. Yeah, it’s nice to be able to stay at home, but it does make it a kind of different week.”

Not only does Matthew have to deal with the pressure of performing in her home country, but this week marks the final qualifying event for the European Solheim Cup team, of which Matthew will be at the helm at Gleneagles come September.

While the European Solheim Cup Captain wouldn’t reveal who she’s considering for her four captain’s picks, she did say a good finish this week in Scotland could have a real effect on who makes the team.

“I think at this stage, you know, everyone’s being considered,” Matthew said. “I think a lot will depend on the blend of the team. We’ve got a few rookies in there perhaps potentially, so looking at perhaps whether you want foursomes, fourball, adaptable players who can play both formats.”

The full European team will be announced on Monday at Gleneagles, and Matthew said the hardest part of her role is going to be calling the players who don’t make the team.

“No matter what you do, someone’s not going to be happy with your decision. The best thing I’ve tried to do is try to be up front with people and communicate if they come and ask me, I’ll try and be fairly honest in what I think they need to do. I think communication is what I’m hoping and I’ll try to do.”