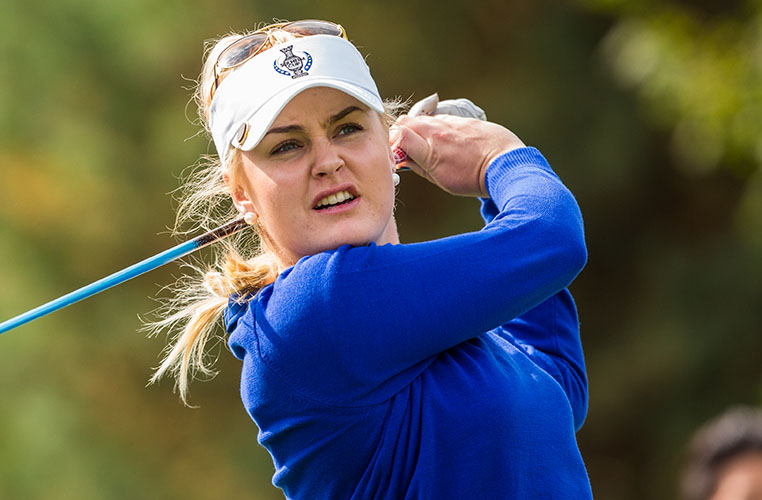 The 2019 Fatima Bint Mubarak Ladies Open champion, Charley Hull, became the youngest competitor to participate in The Solheim Cup aged 17 as part of the first European team to win in the United States at Colorado Golf Club, in 2013. Since then, she has impressed at Golf Club St. Leon-Rot in 2015 and Des Moines, Iowa, in 2017. Still only 22, she is looking to make a fourth appearance for Europe at Gleneagles in September.

What is your first ever memory from The Solheim Cup?

Peanut butter and jam sandwiches in 2013 –they kept bringing them out to me on the course once they realised that I was enjoying them.   It was the first time I’d tried such a thing, but of course now I’ve come to learn that they are a global favourite.

What are your best memories from The Solheim Cup?

Probably the time in Germany in 2015 when Suzann Pettersen and I were playing Paula Creamer and Morgan Pressel in the Foursomes on Day Two.    We were 3 down with 4 holes to play, but we managed  to birdie the last four holes to win the match.   That was fun to be a part of.

It’s fun to come together as a team and all be on the same side.  There’s a really good bond between everyone that week, and we can ask each other questions or advice that we might not be so willing to do in regular weekly stroke play events.

What’s your role and/or nickname in the team room?

I’m not sure what my nickname is, but I’d love to know.   I guess I’ve been seen as the kid on the team up until now but hopefully this year I won’t be the youngest, and someone else can take on that role!

What would it mean to qualify to play under Catriona Matthew?

It would be a real honour to play for Catriona, in what would be my first match on British soil.   Obviously being on her turf will be great, and hopefully we’ll get some good, loud support.

What would it mean to be part of a winning team on home soil, at Gleneagles?

Everything – you can’t beat that winning feeling and there’s no second place that week.  It’s all or nothing.

Which team do you think will win the Solheim Cup this year and why? What do you predict for the winning score?

I think we’ll have quite a different team this year with a good few rookies – I think we’ve got a great chance of winning the Cup back.  I’ll take any winning score!

Who would you most like to face in the singles and why?

Probably Lexi Thompson, as I enjoy watching her play, and we also get on well.

What did you learn or experience when playing in the PING Junior Solheim Cup and how did it motivate you?

I played the Junior Solheim cup in Ireland in 2011 and it was great to get an idea of what the Solheim Cup would be like when I did make the team for the main event.  I was lucky enough to have the same captain, Lotte Neumann, in both the Junior Solheim, and then when I made the Senior team for the first time in 2013.