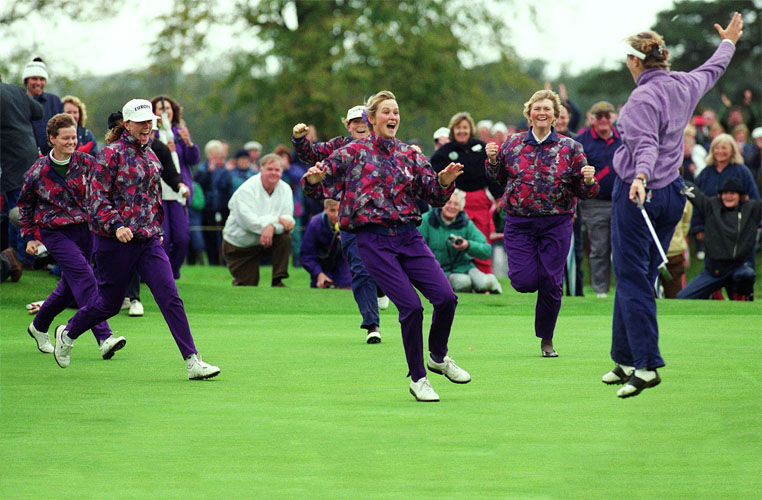 Scotland is like kryptonite for even the most star-studded U.S. Solheim Cup teams.

There’s something about the birthplace of golf that weakens American defenses in the event.

The United States has dominated the biennial international team competition since it began in 1990, compiling a 10-5 record, but the Americans are 0-2 on Scottish soil, where they are headed to meet the Europeans again, at Gleneagles next week.

The cold, damp Scottish weather appeared to help the home team in both those victories, and so did controversies that made European blood boil.

The Solheim Cup might have been launched in Florida, but Scotland put it on the map.

U.S. captain Kathy Whitworth put together a “Who’s Who” of American women in golf for the inaugural staging of the matches at Lake Nona in Orlando. Her wonder women routed Europe, 11½ to 4½. Nobody paying attention was surprised, but, really, hardly anyone paid attention. The LPGA could barely give away tickets to the new event, and no TV entity stepped up to broadcast it.

The Euros thanked American Beth Daniel for that, for igniting interest with an inflammatory comment credited to her.

“You could put any one of us on the European side and make it better,” Daniel was quoted saying in a Golf Digest story advancing the competition. “But the only Europeans who could help us are Laura Davies and Liselotte Neumann.”

British bookmakers apparently agreed. The Americans were a staggering 6-1 favorite in some betting shops.

“Our players are hell-bent on seeing Beth Daniel eat her words,” European captain Mickey Walker said back then.

That proved the big story with the Euros stunning the Americans in lopsided fashion, 11 ½ to 6½.

All of a sudden, people were paying attention.

“It was an amazing upset,” Walker says today. “It was, obviously, the biggest upset in Solheim Cup history, but it was a big upset in sport, generally. I’m a soccer fan, and I would liken it to one of the top teams in the premiership getting thrashed by a non-league team three or four leagues below them.”

Sweden’s Helen Alfredsson said it was one of the highlights of her career.

“I guess this is our answer to Beth Daniel,” she told reporters in the aftermath.

The only problem, Daniel insisted, is that she never made the inflammatory comment in question. She denied saying it back then, and she denies it today.

“The quote’s attributed to me, but I never said it,” Daniel said this week. “A lot of those European players were friends of mine, and they were successful on our tour. It would have been a ridiculous thing for me to say.”

Golf Digest stood by its story.

And British reporters rode the story.

“The British media loves that sort of thing,” Walker said.

Alfredsson said the comment “ignited a fire” in the team room.