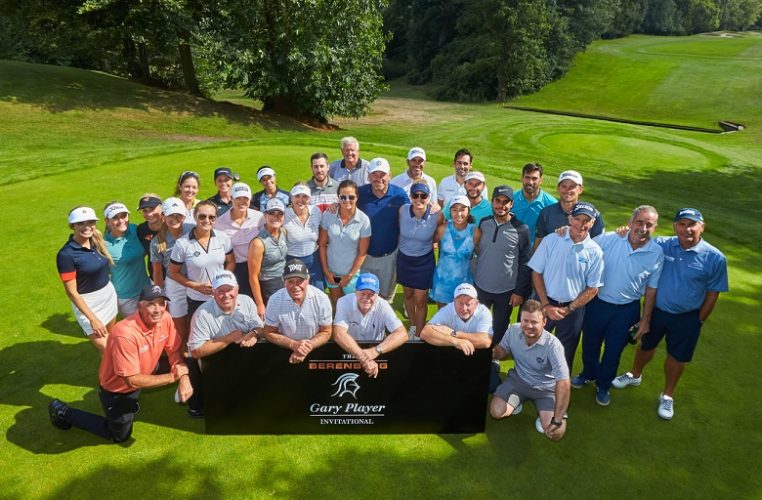 A selection of golfing royalty and representatives of the business world gathered at Wentworth Club yesterday (Monday 22nd July) for one common cause: Golf and Giving. A magnificent amount of more than $125,000 was raised during the event to support underprivileged children and communities at the 2019 Berenberg Gary Player Invitational.

A total of 72 players took to the Gary Player-designed Edinburgh Course to compete for the Baobab Trophy. Amongst the all-star field were eight Ryder Cup legends, eight Major champions and a host of PGA Tour, European Tour and Ladies European Tour stars.

Of those, it was the team led by professionals Alvaro Quiros and Julia Engstrom that claimed the victory and took home the iconic trophy. Representing the team, Engstrom commented of the day: “What a day it has been. It’s been truly inspiring to be surrounded by so many legends and to share the common cause of Golf and Giving. It’s a really unique event and it was the cherry on top to take home the trophy with Alvaro Quiros and the rest of our incredible team.”

The Player Foundation continued its quest to raise a total of $100 million by 2025 for underprivileged education and communities, a feat that is being aided through the support of sponsors Rolex, Lavazza, SAP and title sponsor Berenberg, the world’s second oldest bank. The 2019 event marks the eighth year Berenberg has been title sponsor for the Gary Player Invitational.

“It’s always an easy decision for us to continue to support this Gary Player Invitational series” commented David Mortlock, Head of Berenberg’s Investment Bank. “Our work with Gary Player on this event in particular impacts the lives of so many people, and his commitment to helping others is nothing short of inspirational.”

Tournament host and legendary golfer, Gary Player, is renowned for his commitment to future generations and this forms the basis of his philanthropy. Following the London stage of the invitational series, Gary Player reflected: “The opportunity to make a difference in the lives of others is something we all should take advantage of when the opportunity presents itself. That is what we have with the GPI Series and the funds raised will undoubtedly make a difference to many young lives.  I can’t thank all our sponsors and guests enough for their support at another remarkable event.”

The next stage of the series is the Berenberg Gary Player Invitational at GlenArbor Golf Club in New York, on the 6th-7th October.