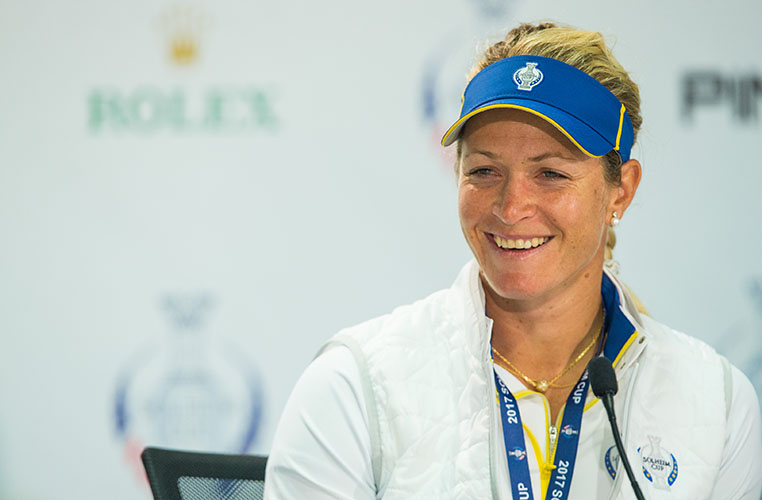 European vice-captain Suzann Pettersen is gunning for a Solheim Cup pick and will tee up in this week’s Aberdeen Standard Investments Ladies Scottish Open looking to impress captain Catriona Matthew.

Pettersen and Matthew played together in the Dow Great Lakes Bay Invitational three weeks ago, which was Pettersen’s first start in 20 months, following the birth of her first child, Herman. Although the pair didn’t make the cut, Pettersen is out to prove herself worthy of one of Matthew’s four picks.

“I’m not the one who will pick the final four. I’ve told Beany I would love to, but I also need to show some signs of good form.

“Had you talked to me in April, I would have said, no chance, but things have changed a bit. First of all, I’m a vice captain, but if she wants me to play, I’ll be honoured and I’ll take that as a credit. Not even I know that.” 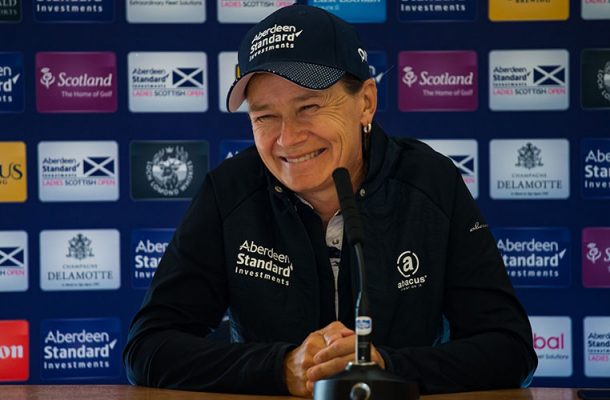 When Matthew was asked, at a press conference, about Pettersen’s chances and whether a Scottish Open win might put her into the frame for selection, the captain replied: “I suppose you need to ask Suzann that… but it’s great to see her playing. I played with her and she was impressive and looked like she had not been away. She was perhaps a little unsure of how she might play with being out of the game for probably the year-and-a-half she was. I think just from talking to her, she’s kind of got that bug back in her system and is keen to start playing again.

“Obviously she’s got the experience there. I would say she’s looking good, actually. I think she’s looking confident. She putted well at the Dow. So it will be interesting to see how she does this week.”

The Aberdeen Standard Investments Ladies Scottish Open is the final qualification event for the European Solheim Cup team, which will provide a gripping subplot as the players try to catch Matthew’s eye or earn their place on the team.

Ladies European Tour members will be awarded points for top 10 finishes, with 70 points available for a win down to 7 points for 10th position in the ‘Host Event’. The top three places on the team, currently occupied by Carlota Ciganda, Caroline Hedwall and Anne Van Dam, qualify from the European Solheim Cup points list, while the next five spots, currently held by Charley Hull, Georgia Hall, Azahara Muñoz, Caroline Masson and Anna Nordqvist, come via the Rolex Women’s World Golf Rankings. The other players in the field who are in the frame include Bronte Law, Celine Boutier, Esther Henseleit, Marianne Skarpnord, Mel Reid, Meghan MacLaren and Nicole Broch Larsen.

“If you look mathematically, there’s a lot of people who could still potentially play their way in. There’s still a big pool. I’m looking at a slightly smaller one, but you have to be ready for that unexpected result,” Matthew said.

“Obviously I’ve got my eye on a few people and I think, as a player, you kind of know… some of them haven’t had the results the last couple of weeks they would have liked and know they have to put in a big week this week. I think everyone kind of hopefully knows what they need to do.”

The European team will be announced at a press conference at Gleneagles at 2pm on Monday, August 12, following the final round of the Aberdeen Standard Investments Ladies Scottish Open at The Renaissance Club near North Berwick, which takes place from Thursday to Sunday.

This is the penultimate qualification event for the United States Solheim Cup side, led by captain Juli Inkster. The United States team will be revealed following the CP Women’s Open in Canada, on August 25.