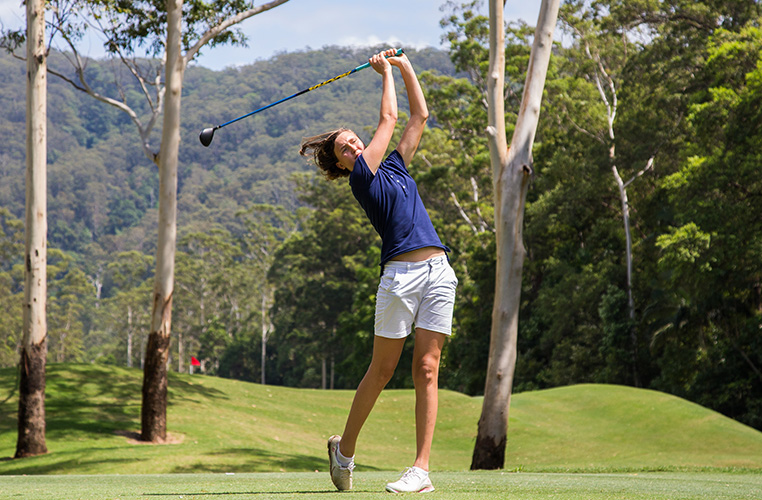 The LET’s youngest member for 2020, Pia Babnik from Slovenia, may only have turned 16 last month, but she has some big goals for her rookie season.

“My goal is to go to the Olympics in Tokyo,” she said, without hesitation.

She’s making her debut as a professional at Bonville Golf Resort in Coffs Harbour, one of the most beautiful stops on the LET circuit.

“I feel amazing to be here in my first tournament as a professional and I can’t wait to start playing.”

Last month, she finished 11th at LET Q-School and completed her amateur career with a handicap of +7, but she was a prodigy well before that.

In 2019, she won the Helen Holm Scottish Open, the British Girls’ and the European Ladies’ Team Championship in stroke play. She qualified for the PING  Junior Solheim Cup and represented Europe in the competition at Gleneagles and also played in the Junior Vagliano trophy.

But this is the start of a new journey. Does she feel any pressure? There is no sign of nerves.

Pia landed in Australia for the first time a fortnight ago with her parents and 14-year-old twin brothers, who are also competitive golfers. She practised at Bonville, but due to 600mm of rainfall last week, they also ventured to play at inland Dubbo Golf Club, which will host the Women’s New South Wales Open next week.

With the whole family in Australia, dad, Aleš, will caddie, but Pia says that her brothers will probably stay back and play on their computers in the clubhouse, due to the hills.

During her 13 years of golf development, Pia has also found time for badminton, skiing, table tennis, swimming, yoga, drawing and painting, which are amongst her other interests, but there is no doubt that her focus is on the biggest event in golf: the women’s Olympic Golf Competition, which takes place at Kasumigaseki Country Club on August 5-8.

Beyond the top 15 world-ranked players, there can be a maximum of two players from each country. Fellow Slovenian Katja Pogacar, who is 400th on the Rolex Women’s World Golf Rankings, currently occupies the 60th and final position on the Women’s Olympic Golf Rankings, while Babnik starts this season ranked 1131st in the world.

However, with nine LET tournaments to be played between now and the end of the women’s Olympic Golf Rankings qualification period on June 29, there is every chance for this talented and passionate young player to achieve her ultimate goal.