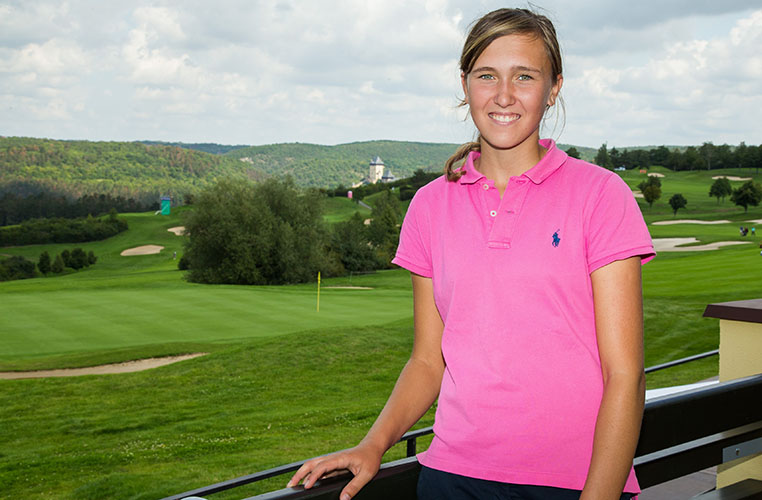 15-year-old Slovenian Pia Babnik will make her first start on the Ladies European Tour this week in the Tipsport Czech Ladies Open, which is a dual-ranking event with the LET Access Series.

Babnik produced a commanding display of golf to win the centenary R&A Girls’ Amateur Championship at Panmure in Scotland on Saturday, defeating Austria’s Isabella Holpfer in the 18-hole final.

The talented teenager also took home the Helen Holm Scottish Women’s Open Championship four months ago, with a seven-shot win over France’s Charlotte Bunel at Royal Troon. She will return to Scotland next month to compete for Europe against the United States in the PING Junior Solheim Cup, taking place over the King’s Course at Gleneagles.

Although she prefers Scottish links courses, Babnik, who plays off a handicap of +6.2,  is looking forward to the challenge of the picturesque Golf Resort Karlštejn, which is situated on the slopes of the Voskov hill, enjoying breath taking views of Karlštejn Castle.

“I can’t wait to get started, since this is my first LET tournament,” said Babnik, who started to play golf aged three at her home course Trnovo in Ljubljana.

“Playing in LET Access Series events has allowed me to see up close the skills of the professional players and where I need to improve more. I hope I can get more invitations for professional tournaments and turn professional soon, since it is great to compete with the best players.”

Golf Resort Karlštejn, which opened in 1993, hosted the Chemapol Trophy Czech Open on the European Tour in 1997 and Germany’s Bernhard Langer won, with a score of 20-under-par. The course record holder is Sweden’s Patrik Sjöland, who registered a 61 in the second round of the tournament.

The LET’s all-time course record is 61 (-11) and Babnik is already eying a low number.

“Firstly, I would like to make cut and then to finish as high on the leader board as possible. I hope to go very low at least one round,” she said.

“I am very happy with my performances recently and I have never played as well as this year. I love to win… and big tournaments bring you so much more happiness! I am also looking forward to playing in the PING Junior Solheim Cup and being at the biggest event in women’s golf next month. I know all my teammates and I think we will have a lot of fun together and I hope we will beat the USA!”

The Tipsport Czech Ladies Open is a 54-hole/three-round stroke play tournament featuring a field of 138 players and gets under way from Friday. There will be a cut to the leading 50 professionals and ties plus amateurs after the second round and the third round is scheduled to finish at 2.30pm local time on Sunday.