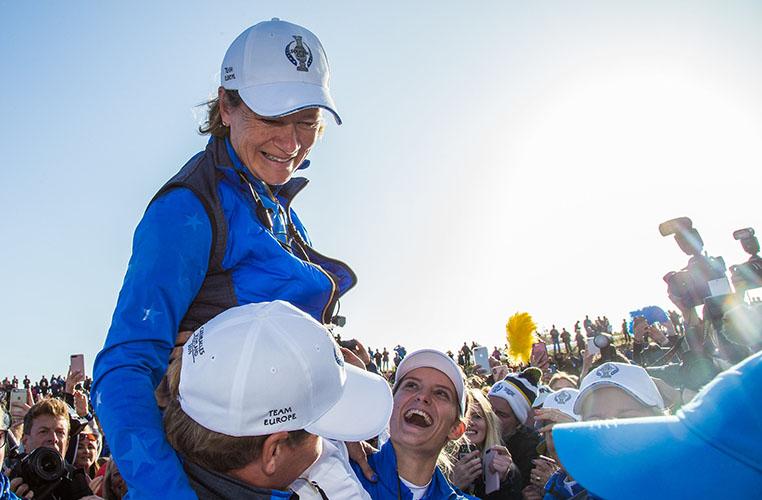 I was cooking dinner for my family when the call came. That has become my routine. Since the Solheim Cup at Gleneagles, I haven’t been back on the LPGA Tour, opting to stay close to home with my husband, Graeme, and our daughters, Katie and Sophie. Dinner together is a great way to spend the early fall evenings in North Berwick, Scotland. But then my phone rang and things changed.

The board and the past captains of the European Solheim Cup team had met and, as a group, they wanted to know if I would captain Team Europe again. I would be less than honest if I said I hadn’t thought about it. Being captain of the winning team this past September was the highlight of my career. Capturing the Solheim Cup in Scotland, an hour’s drive from our home, with my close friend Suzann Pettersen making the clinching putt on the last hole in the last match on the course…you can’t top that.

Because Gleneagles was so close to where I live, I had spent a lot of time helping promote the 2019 matches. Whether it was driving over for a media day or making an appearance for a sponsor, I did whatever I could to make that Solheim Cup a success. I also did a lot of things that took me out of my comfort zone – picking out uniforms, working with Irene Riach of the Scottish Institute of Sport Nutrition in planning food options (Irene was an amazing help) and designing the team room – all of which were a far cry from preparing my own game for tournament play.

My captain’s picks were stressful, not because I wasn’t confident in the players, but because I knew that if we lost, every decision I made would be second-guessed. I had to accept that. Winning captains always receive far more praise than they deserve and losing captains always bear the brunt of the blame. Once I reconciled myself to that fact, I was able to move on without a second thought.

The calls to the players who did not make the team were hard, though. There were about seven players I either phoned or spoke to face to face. A couple of them saved me by pulling themselves out a few weeks before, telling me they weren’t playing well enough to be considered. None of the other conversations were easy. Everyone had been trying for two years to make the team. But many of the players sort of knew that they hadn’t done enough.

Mel Reid was the toughest. Mel had come into some form in the summer, playing very well at the KPMG Women’s PGA Championship. She had also been a good Solheim Cup player. So that one was difficult.

I think it shows the love Mel has for the Solheim Cup that in one breath I was telling her that she hadn’t made the team, and in the next I was asking her to be a vice captain and she jumped at the role. It shows what the event means to all the players, past and present. And it speaks to the camaraderie among all Europeans.

Mel was fantastic, a wonderful vice captain. She knows all the players and was a great asset during the week. Laura Davies and Kathryn Imrie were terrific as well. All the vice captains provided great thoughts, perspectives and personalities to the team.

I also learned some things about myself. I talked to many past captains of both the Solheim Cup and Ryder Cup. Each offered something valuable. I learned about not only compromise, but communication…communication with players, caddies and the back-room team. That was a key to our victory. I listened and stayed attuned to as many needs as possible. It’s not all that different from being a mother, actually. You have to guide your children in a certain way to get the best out of them, but also give them room and freedom to grow and perform at their best. The same is true when you’re captaining a Solheim Cup team. The quality of play on both sides is the best in the game. The difference in performance is razor thin – one putt, as evidenced by the final half-hour in Scotland where the tide turned in Europe’s favor. My job was to help our team perform at its best, to keep everyone happy and eliminate distractions.